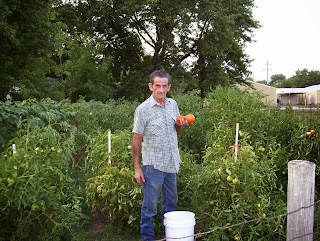 I took this picture of Dad last Summer while John and I were walking the little dogs. Dad had planted 50 tomato plants and they were just about to do him in. He gave tomatoes to the mailman, neighbors, people at church, strangers....
John laughed every time he saw Dad in the garden picking tomatoes.

John loved my Dad. He was like a Dad to John because his Dad passed away when John was 18. He knew of my resentment of Dad because of the abusive things he had done. But, John always tried to mend the fences with me and Dad. He tried to help me understand how Dad had suffered as a child too.
John helped me more than anyone to see things in a better light. He helped me see that it is better to forgive than to carry the resentment. That the resentment just hurt me..

No matter what has happened in the past.. I forgive Dad.

And I am asking for prayer for him for tomorrow. He is having surgery tomorrow morning to remove the tumor, it is huge and growing fast.

If anyone who reads my blog would put him on their church prayer tree I would be very grateful. His name is Alley.

I have prayed about my heart all week. I don't want to carry the burden of my unforgiveness anymore. I want free from it.
That doesn't mean that when we forgive that we have to be someones door mat. It just breaks the power that they held over us. And Dad has truly tried to change over the years. So, please pray for him.

And if anyone would be interested in sending Dad cards please e-mail me. Dad loved it that everyone mailed John cards. He saw the excitement John had every time he got a new card. And he thought it was so neat that people who didn't even know John would care enough to send him cards.

He asked me today if I thought my friends off my blog would send him cards. I told him that you guys probably would because you have beautiful hearts.
He just smiled real big..
Posted by ~Red Tin Heart~ at 10:10 PM

Nita, your so right when you forgive it doesn't have the same power. Someone said once that it was like taking poison yourself and expecting the other person to suffer. They don't but you do. It's nice that John is still helping you. I'd love to send your dad a card!

Nita, please e-mail your Dad's address to me at suscleve@aol.com. I would love to send him a card. I'm lifting him up in prayers, and you too. --Susan

keeping him and you in my heart and prayers, nita.....i love what vickie wrote.
hugs and love,
kimberly

Vickie: That is probably the best description of what unforgiveness does to someone I have ever heard.
"Like taking poison and expecting the other person to suffer"
That is so powerful..
I know John helps me. Just thinking back on his words and thoughts help me.
No one's opinion mattered more to me than Johns.
He was a very forgiving person. He forgave those who so often forgot about him when he needed them most.
Thanks Vickie for sending Dad a card. I will e-mail you his address. Love Nita

Susan: Thank you for lifting us up in your prayers. That means so much to me.
And thank you for sending Dad a card. I will e-mail you today.
Love Nita

Kimberly: Vickie is a wise woman. Thank you for keeping Dad in your prayers. Sending you love.. xoxo Nita

I have had your dad on my prayer journal since his March 26th surgery...I will keep him at the top and pray for this surgery...
Be Encouraged..
Mimi

Nita, I would love to send your Dad a card. You can email me his address here: rhondabrite@yahoo.com

I would love to send your dad a card.
Forgiveness really is freeing. I was finally able to forgive my father. And finally after all these years, we are developing a relationship. It is still far from what I dream of, but so much better than it was.
amanda

Nita,
My name is Matt. I am a nurse that cared for John while he was staying at SLU Hospital. I just found out today the news about John. I was so devastated when I found out. I cannot stop thinking about it.
John was such a special person. He was always so happy and jovial. He had a kind heart and cared about you and your family so much. You could just see it in his eyes everyday. Words cannot describe how much I enjoyed working with your family.
I entered the profession of nursing hoping to connect with patients and their families in a special way. The connection I felt with your family was one such connection. So many patients and families come through the hospital doors daily...I have never forgotten yours. Tonight as I read your blog, tears streamed down my face. I wish the best for you and your family. John and your family will continue to be in my prayers. In the short time I knew John, he left a deep impression in my heart and soul. Please send my best to Elizabeth, and feel free to email me at MatthewLCary@gmail.com
God bless!

Hi
I will ask our church to pray for your dad. You and I have so very much in common. I'm glad you chose to forgive too. God helps me to stay focused. We ARE linked at the heart.
I would love to send a card to your dad, what's his address? Just pop me an email.
Hugs to both and may the Lord bless and keep you and your father,
Love,
Pam

Just checking in on you sweetie...I'd Love to send cards as well!!!Much love to you!!hughugs

Nita,
Your father will be in my family's prayers along with your mother your self and your children. You are right to forgive and move forward and John is still helping you through each day he is right along side you Nita guiding you through each day.
I would love to send your father a card Nita.
LoriHere_now@hotmail.com please forward the address.

Hi Nita
I've got your dad's card all ready with a little something special in it. Please email me with the address.
Email is on my blog.
Hugs,
Pam

Hoping things went well with your Dad... am keeping him in my thoughts and prayers. xox Deb

I will most definitely pray for your father. I would love to send him a card too. I enjoy sending people mail and I know the joy of receiving something in the mail. I'll definitely come back to read your blog. I resonated with this post immensely, I forgave my father years ago for all the past hurts and abuse and have accepted him for who he has become. I did not think it would be right of me to deny my son knowing his grandfather.

Nita,
I will keep you and your dad in my prayers and ask for others to pray for him.

Forgiveness will set you free.

I would love to send a card.

Nita,
I will love to send him a card.
Deby

OH NITA!!
YES..I'll send him a card..
send his address AND your's again too

Vickie is SO right!!

and I'll PRAY and add this to my blog today all

Love in Him
God bless you dear heart..Deena

Nita,
I'd love to send your Dad a a card. I'm not a commenter, but I am a devoted reader and my heart absolutely breaks for you and your family. Please send me the address. I also have something that I would like to send to you if you are willing to give me your address too. Thanks. Shara
monkeybox at juno dot com

I too, have been a lurker for some time - and would love to send your dad a card.
Bless you sweetie.
mkgundy@yahoo.com

Hi Nita, just dropping in from Deena's to say hello. Keeping you and your dad in my thoughts and prayers. Would love to send your dad a card. Please email me at serendipitypark at yahoo dot com

Nita...email me your dad's address and I will mail him a card too! Whatever warms the heart and puts a smile on the face is well worth any time spent...will of course pray for him too!

Dear Nita,
I have been keeping your family in my thoughs and prayers daily. I hope things are going ok....I just read through the comments...the one from Matthew..the nurse at Johns hospital...wow...so powerful and heartfelt! It is a reminder to you of how special John was. I know you get daily inspiration from his wise words and I know that keeps you lifted.
Be on the lookout for your mailman..he's bringing you a special surprise!

Hi Nita
I hope all goes well for your dad. i hope you are ok too. I sent you a message as was having problems leaving a message . x Dom

Just checking in to see if there is any word of how your Dad is doing this weekend. I am praying for him that he is doing alright, and for you and your family too.

checking in on you....keeping you in my heart and prayers....and your Dad....hoping things went well....know you are thought of each day..
xoxo,
kimberly

I'm reading mostly thru the reader...but want you to know you and yours are still on my prayer list...

Nita, I hate that I missed being here for your rough times. All this time I thought you weren't posting because I was checking your other blog! I am so sorry!

My prayers are going out for your Dad and you to give you strenth to get through this hollowness sweetie! ((Hugs))

~Red Tin Heart~
I love beauty, whether it is in nature, literature or art. And I love music... My day feels incomplete if I haven't had a chance to listen to some good music.. I also love beautiful souls, and kind hearts.

Copyright@ 2007- 2013 by Nita Barrow- Zimmerman
all rights reserved. Please do not use my original art, photos, or reprint my writing without asking me for permission. Thank You...


Pick out one person a day to encourage.

Please pray for the protection of Israel.
And for the Jewish people who live there. May God give them the strength they need to defeat their enemies.

A Bird in the Hand

Stories I Can Tell

Robin and The Sage

"There will come
a time
when you believe
everything is finished.
That will be the beginning."
Louis L'Amour
(1908-1988)

Faith of a Single Mom

My Little Cottage in the Making

"Wisdom is knowing what to do next;
virtue is doing it."
David Star
(1851-1931)
exert from
The Philosophy of Despair

It is never too late to be who you might have been.
George Eliot

~Wishes are free~
So why not make one?

Though I am surrounded by troubles, my God will preserve me against the anger of my enemies. He will clench His fist against my angry enemies! His Power will save me. The Lord will work out His plans for my life- for His faithful love endures forever.

Love From My Studio

Can I Be Pretty in Pink

Gittin it Out of My Head!

If you haven't any charity in your heart, you have the worst kind of heart trouble.
Bob Hope 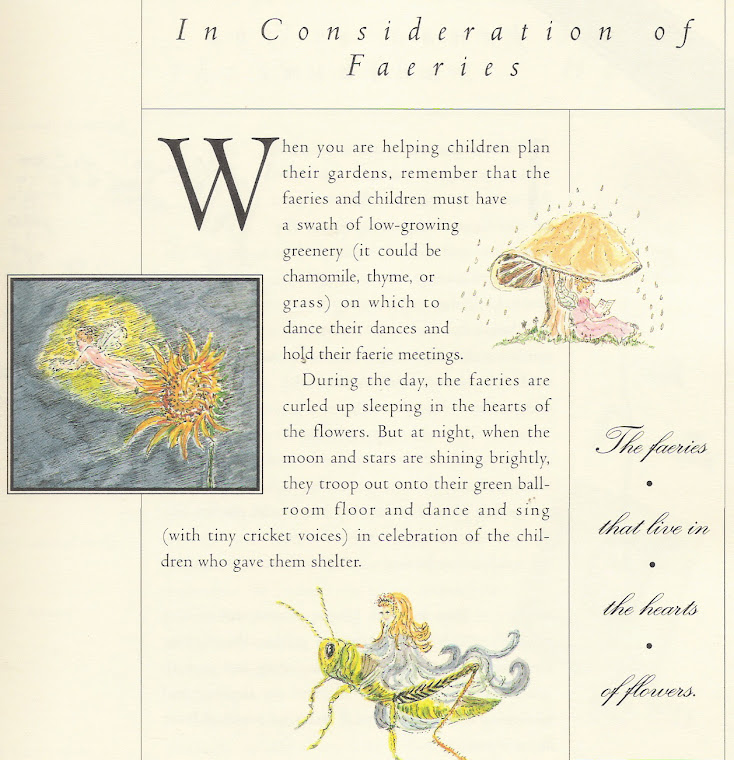 How to Build a Fairy House 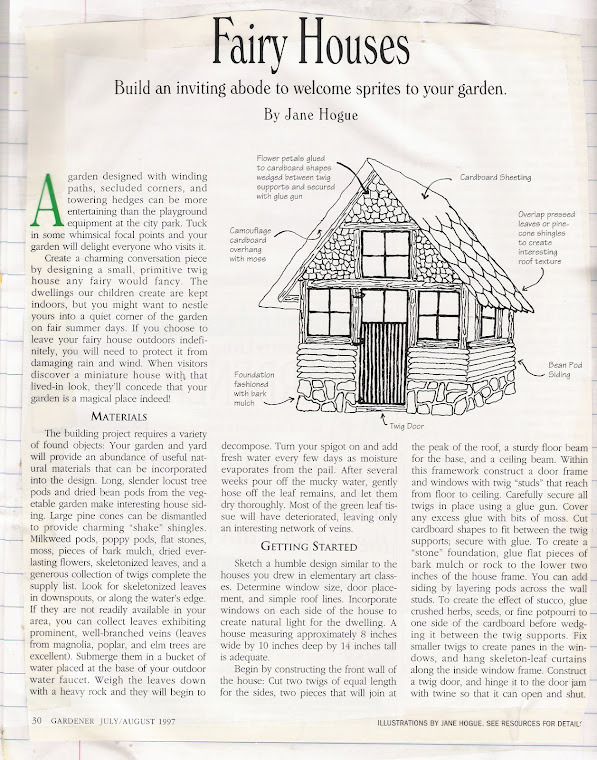 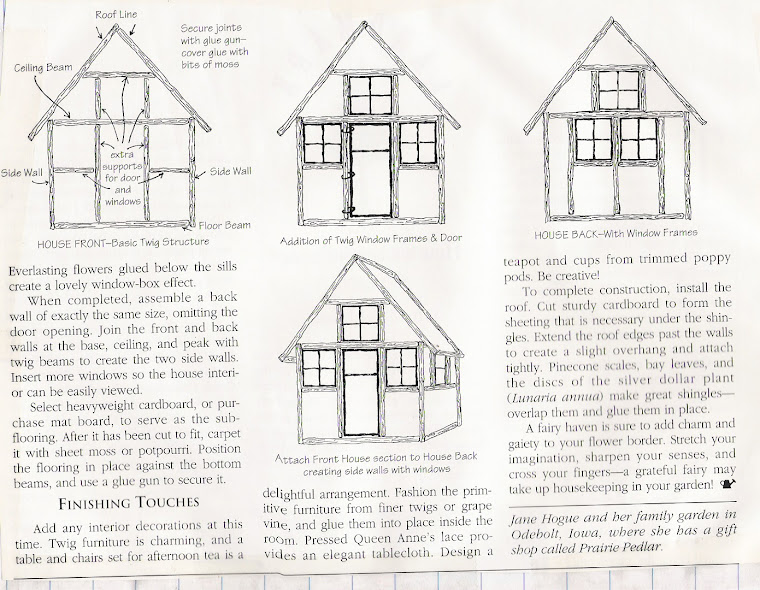 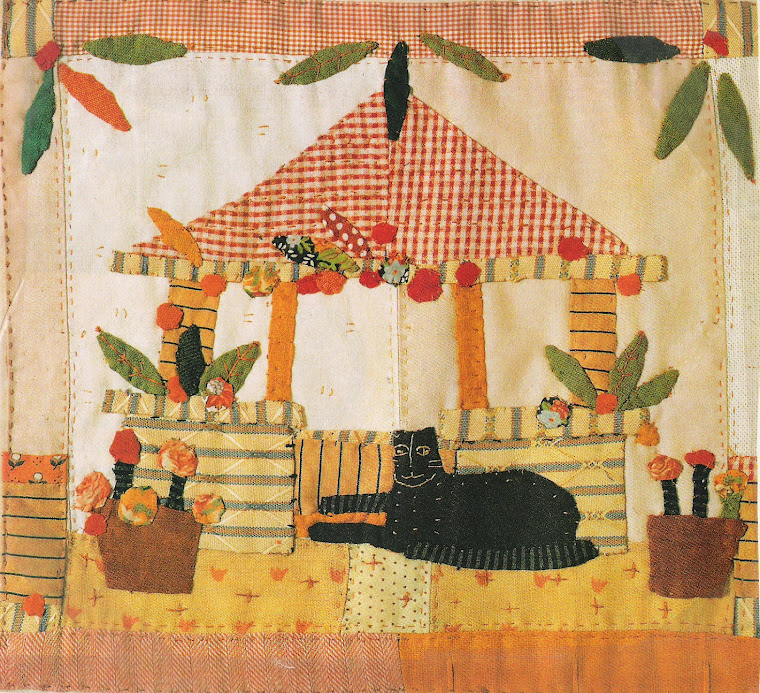 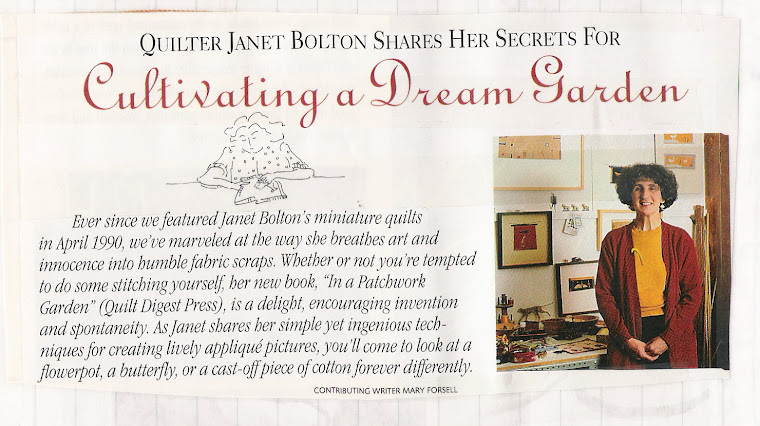 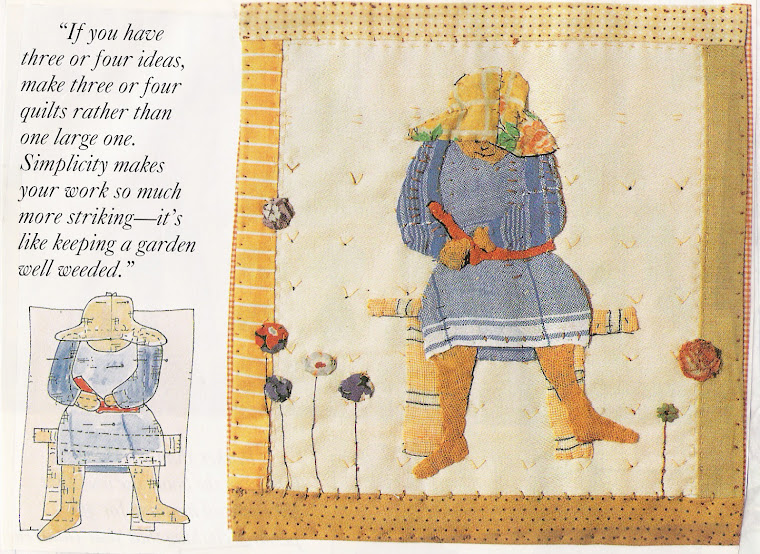 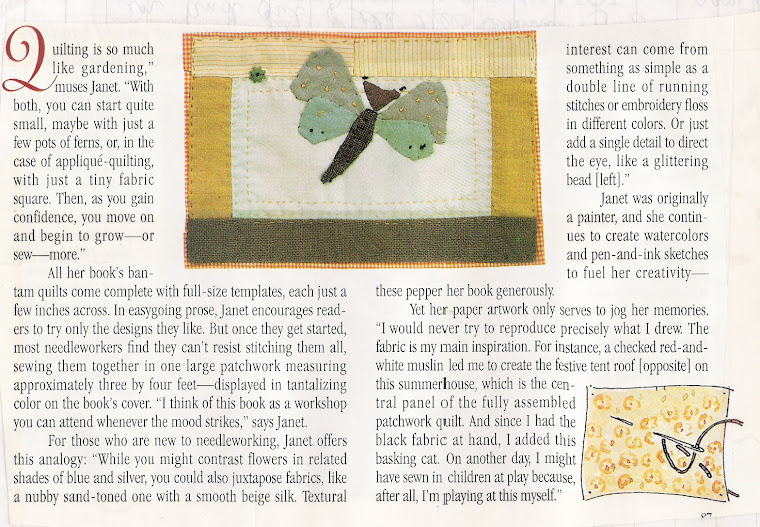 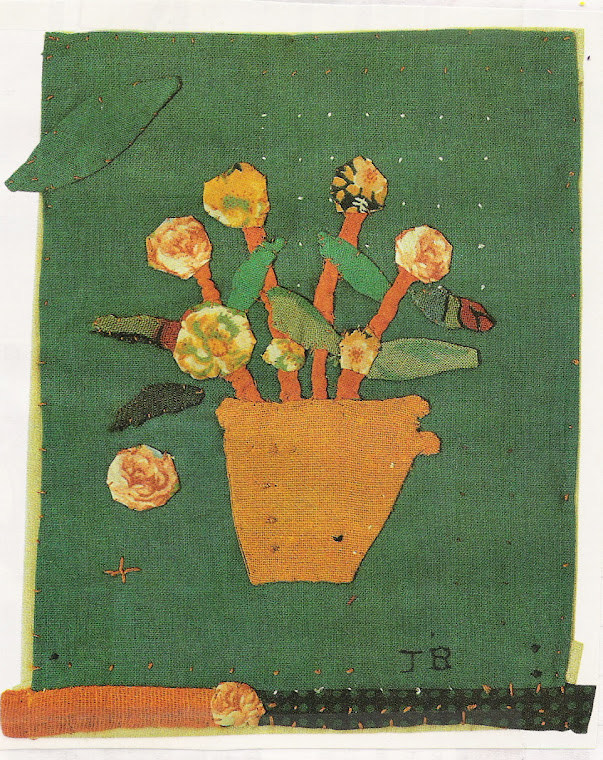